Update Sept 2020: Tatyana wrote in to share that she lost 47 more pounds since we featured her back in 2017. She’s lost a total of 117 pounds and had skin removal surgery in July. Check out her update. 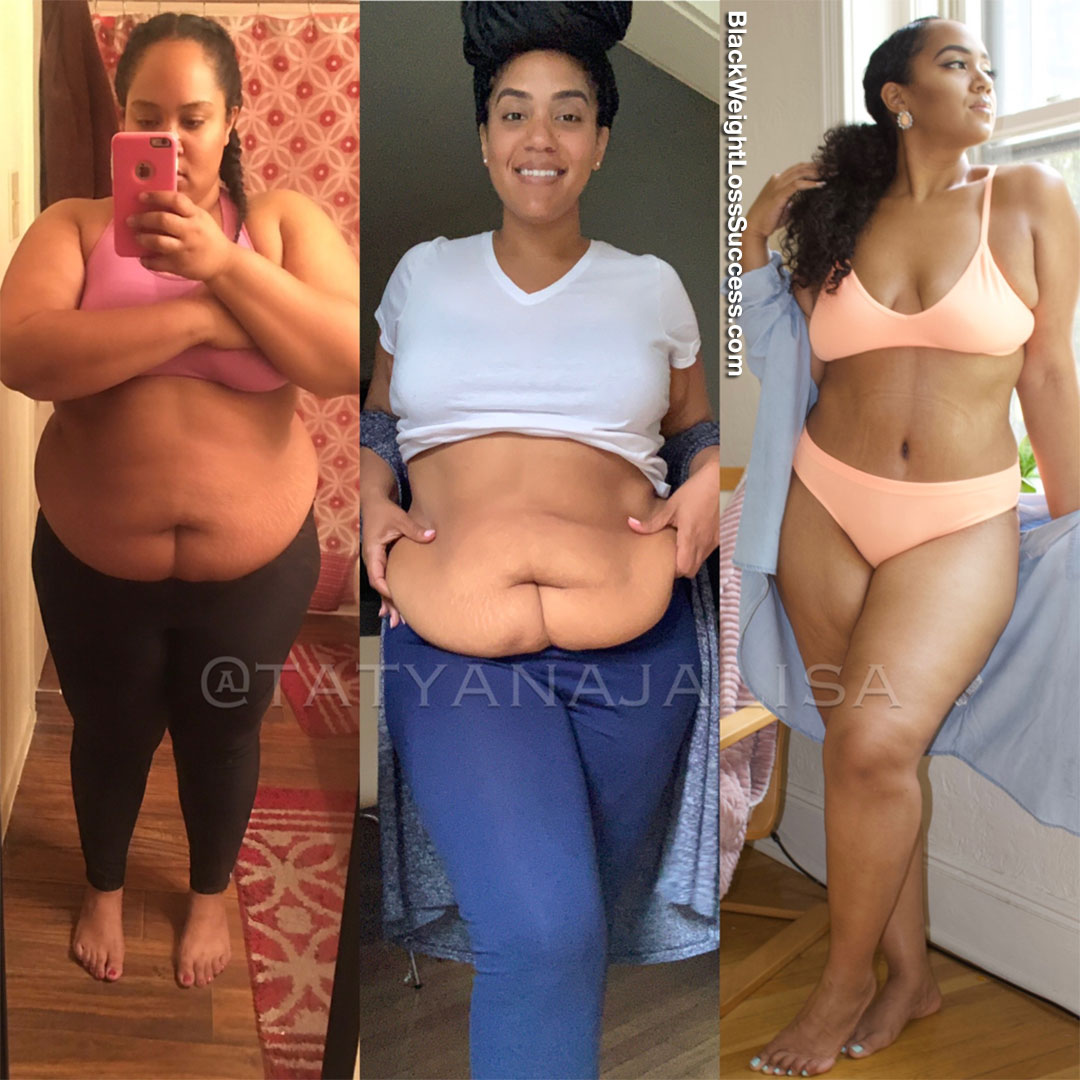 I want to update BWLW on the newest change in my weight loss journey. I got my excess skin removed via tummy tuck in July! Now, I’m down a total of 117 pounds, which is 47 additional pounds lost since the first time I was featured on @blackwomenlosingweight.

How have you maintained your weight loss/continued to lose weight?
I hit a major roadblock in my weight loss journey when I broke my ankle in September 2018. It took me over a year to get on track, but I used my anticipated excess skin removal surgery for motivation. I had over 40 pounds to lose to get under my BMI requirement.

I increased my cardio by running at least 15-20 miles a week and took my vegan lifestyle up a notch by going raw vegan for two months. I reached 100 pounds down again. I even surpassed that goal by weighing in at 201 pounds on the day before surgery. Now I weigh 193 pounds, which is the lowest I’ve been in over ten years.

I had 6 pounds of excess skin removed on 7/8/20. I’ll be cleared to get back to training in October 2020. Then, I will begin working towards my next set of fitness goals.

Of all the lessons you’ve learned on your journey, which one stands out the most at this point?
The lesson that stands out the most is to enjoy and embrace every step of your journey. The differences between my before and after pictures are pretty dramatic, but during each chapter, I found something that I was proud of as I worked to conquer new goals.

Would you like to offer any new or different advice to women who want to lose weight?
My advice would be the same. I would tell anyone who wants to lose weight to go for it wholeheartedly. Start before you get to the point of being sick and tired of being sick and tired. I saw myself sinking slowly, but my perception of “slowly” was way more dramatic than I had realized. By the time I finally brought myself to do something about it, I had reached my rock bottom. I have had a hell of a time getting back afloat.

Change your eating habits first to set the foundation for your results. If you want to follow in my footsteps, I would definitely recommend watching What the Health and Forks Over Knives. Both documentaries can be found on Netflix. Those two documentaries are life-changing. Commit to exercise as the next step and watch your transformation accelerate.

I also will be sharing my weight loss and surgery journey on my new YouTube channel. Here is my 1st video:

July 23, 2017: Transformation of the Day: Tatyana lost 70 pounds. Her healing journey began as a result of finding herself again after a failed marriage. She hit rock bottom emotionally and faced depression but she never gave up. By embracing a plant based diet and finding the support she needed, she has taken her life back. Check out her journey. 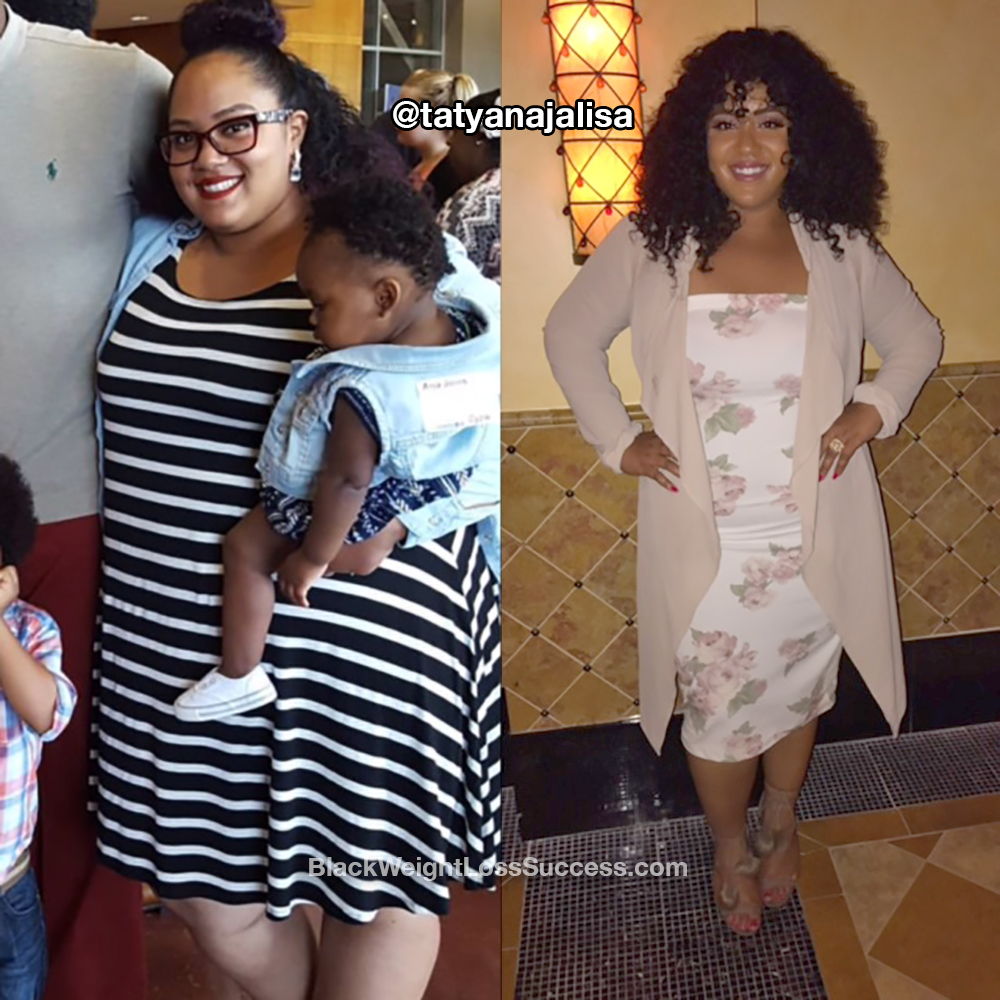 When did you start your journey?
I first started my journey back in 2013. My starting weight at that time was 260 pounds. I was able to get down to 220 pounds by training with @bravo.fit23. I got married in May 2014 and had a tumultuous marriage which caused my weight loss journey to derail.

In December 2015, I hit rock bottom emotionally and weighing 287 pounds contributed to my depression. I decided to do something about it and began training with a girlfriend of mine. I managed to loose about 20lbs, however the problems in my marriage continued. By the time my ex husband and I separated in August 2016, I’d ballooned up to my highest weight of 310 pounds. I didn’t realize how overweight I had gotten in the midst of trying to make my marriage work. My current journey began in August 2016. In the last 11 months, I have lost 70 pounds. My current weight is 240 pounds at 5’6″.

What was your motivation?
My motivation to lose weight was the wakeup call I had after my ex husband and I decided to part ways. I was dying inside and I wanted so desperately to live. I knew I had to make a drastic change for my health and I decided to channel my energy towards creating a new me.

How did you change your eating habits?
A part of my huge wake up call came from watching the documentary Forks Over Knives on Netflix. That documentary spoke volumes to me and I vowed to change my diet completely. I cut out all meat and began a vegetarian lifestyle in August 2016. I knew that my change had to be dramatic and I also knew what my problem was. I was an emotional eater and ate fatty, greasy, salty foods for every emotion I felt. I would overeat and still not get full. My eating habits were terrible and I never thought I would be able to cut out meat, because I didn’t know what that would leave me to eat.

I had heard of all the health benefits that came with eliminating meat from your diet. After watching that documentary, I decided to conquer my own ideologies. I have since transitioned to being a vegan and have cut out all dairy and animal products from my diet. The first 30 pounds of weight that I lost between August 2016 and March 2017 came solely changing my diet. I was not working out consistently at the time.

What did your workout routine look like?
I actually didn’t begin working out until April 2017. I workout 6 days a week for at least 1 hour. I reconnected with my trainer who helped me loose 40 pounds back in 2013. He referred me to a boxing gym that he trains out of. On Monday and Tuesday, I attend boxing bootcamps at S.W.E.A.T Boxing Gym. On Tuesday nights, I complete a 3 mile run with a running group called We Run The Trinity. On Wednesdays, I have a private training session with @bravo.fit23 which is consists of HIIT full body conditioning, focusing on core, legs and upper body. Thursdays are my rest days. I finish up the week by running an additional 9 miles between Friday and Sunday for a total of 12 miles a week.

What advice do you have for others who want to lose weight?
I would tell anyone who wants to lose weight to go for it wholeheartedly. Start before you get to the point of being sick and tired of being sick and tired. I saw myself sinking slowly, but my perception of slowly was way more dramatic than I had realized. By the time I finally brought myself to do something about it, I had reached my rock bottom and it has been a hell of a time getting back afloat.

Change your eating habits first to set the foundation for your results. If you want to follow in my footsteps, I would definitely recommend watching What the Health and Forks Over Knives, which can both be found on Netflix. Those two documentaries are life changing. Also, commit to exercise as the next step and watch your transformation accelerate.

Check out my personal blog tatyanajalisa.com. There, I share my journey through divorce and my healing journey, which incorporates my weight loss story. 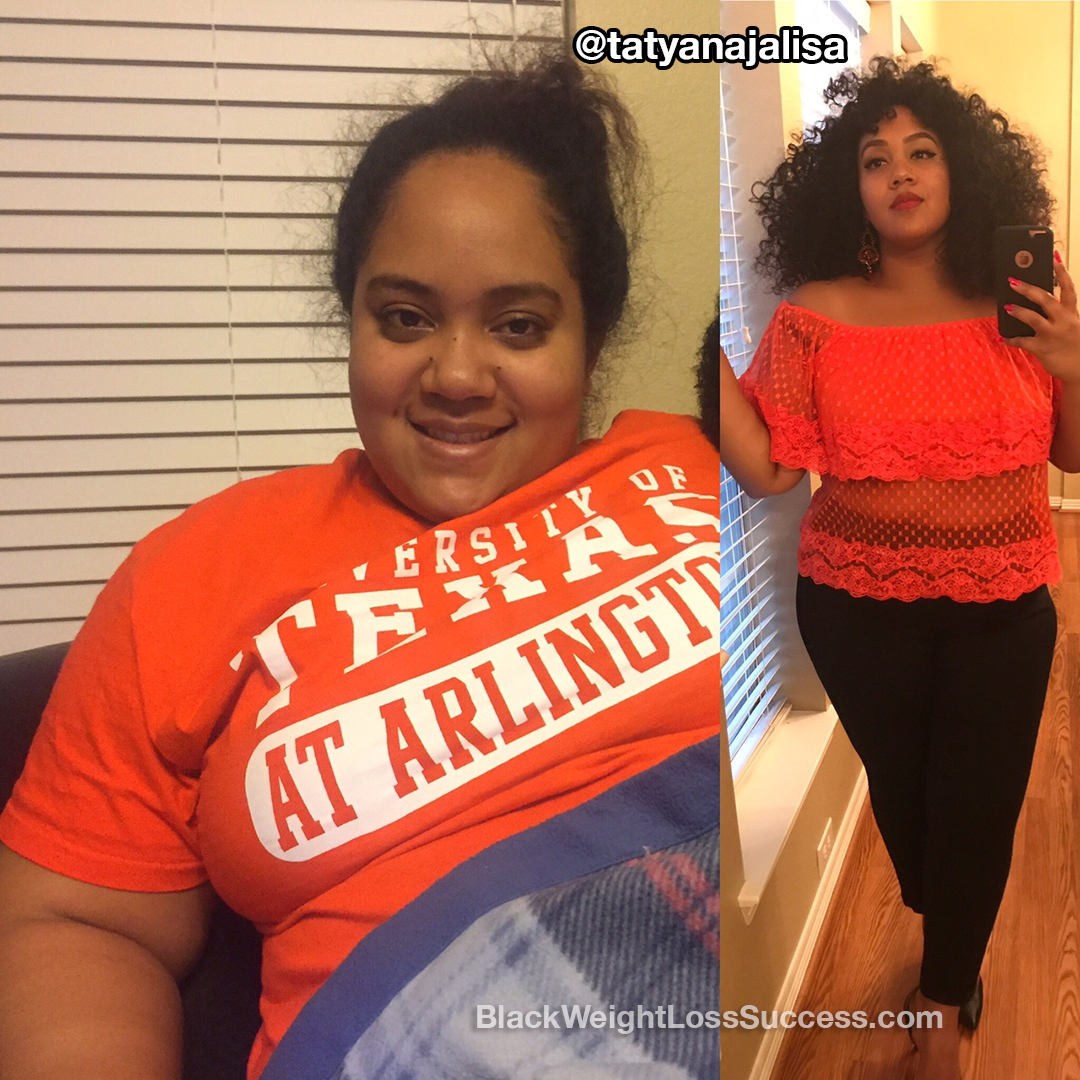 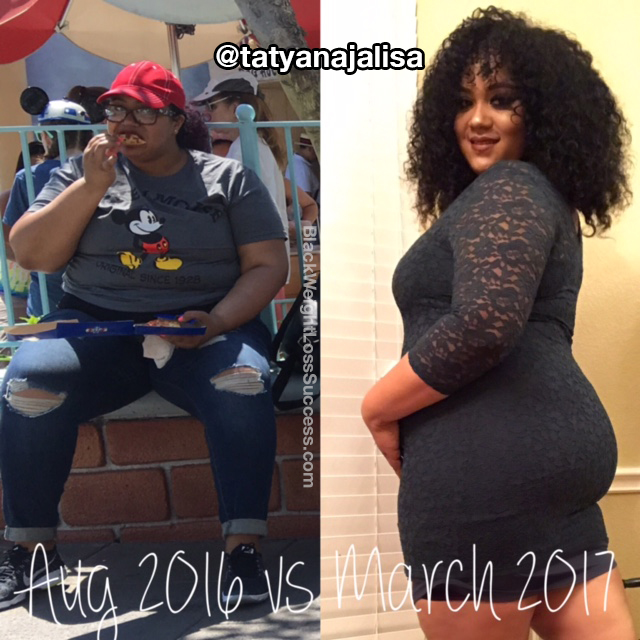 10 Foods to Eat After a Workout

Trump & COVID: Who Is Positive, Who Is Negative

Hospitals Must Report COVID Data or Be Penalized