Past experience may make you think that the only way to avoid hunger on a diet is to get off the diet. It’s true that loading up on calories can make you feel full. However, if your goal is getting to a healthy weight, chowing down on a 12-ounce steak or two heaping squares of lasagna followed by a double chocolate brownie and ice cream is just not going to cut it. But don’t worry! There are plenty of other foods that can fill you up that, as the saying goes, won’t fill you out.

For decades, food scientists have looked at what they call the “satiety factor” of various foods—how long a particular food makes you feel full and, what may be most important, whether that food can keep you from overeating the next time you sit down to eat.

Mission accomplished! Hundreds of studies have found that certain foods—particularly those high in protein, fiber and water—fit the bill. Some of these studies have even focused on particular foods, such as eggs, nuts and even hummus, that can help you push away from the table feeling like you’ve had enough. 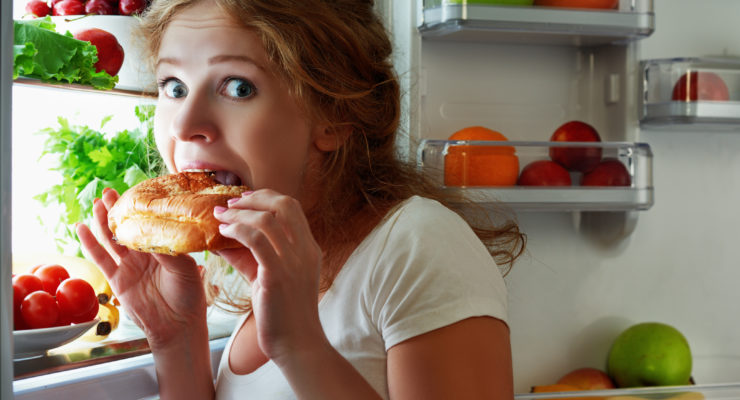 Feeling hungry? Fill your menu with foods that fill you up! Make sure these 8 tummy-fillers are on your weekly grocery list: 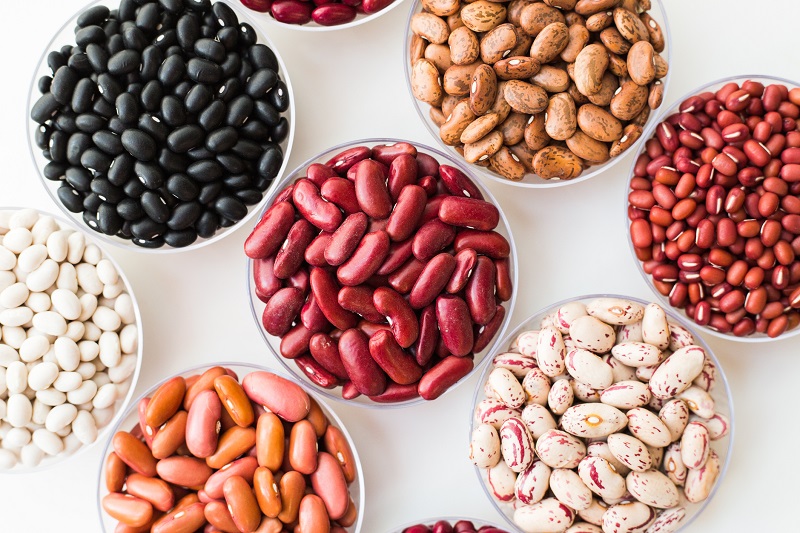 A bowl of chili or navy bean soup might fill you up more than a double cheeseburger. A 2016 study, published in the journal Food and Nutrition Research, found that people who ate a high-protein meal made from legumes (beans and peas prepared as a patty or veggie burger) reported that they were less hungry afterwards compared to when they ate a meat-based meal. Best of all, the volunteers also ate about 12 to 13 percent less at their next meal three hours after consuming the vegetarian protein.

Get your bean fix with some convenient Nutrisystem menu items! Try our Chockful of Veggie Chili, a generous lunch serving of beans and veggies in a flavorful chili sauce.

You can also stock up on our Yellow Rice and Black Beans for a simple comfort food meal featuring fluffy yellow rice, tender black beans and a zesty medley of tomatoes, onions and spices. Add a serving of grilled chicken and a few other fixings to create a delicious and filling dinner.

Got a hankering for a veggie burger? Try this recipe for Edamame Quinoa Burgers which is a powerhouse of protein since it combines soybeans (edamame) with a protein-rich seed (quinoa). 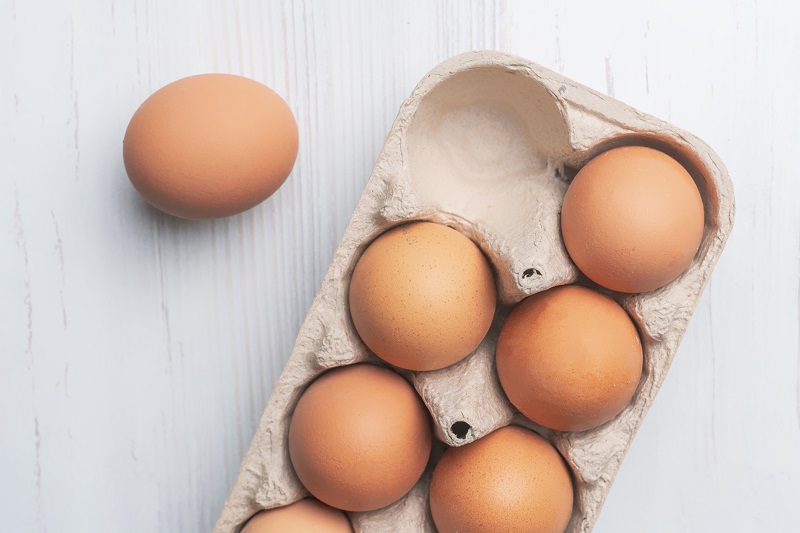 Which do you think would satisfy your appetite more: a baked potato or an omelet? If you guessed omelet, go to the head of the class. A 2011 study, published in the International Journal of Food Sciences and Nutrition, compared the substantial lunches. They found that the omelet satisfied the study volunteers more than the carbohydrate-based meal.

Why? Eggs contain six grams of protein, often being used as a standard reference to evaluate protein in other foods, says Northwestern Medicine. They’re a complete protein too, meaning they contain all the essential amino acids.  When it comes to weight loss, they not only fill you up better than other foods but they also can help build muscle after exercise—the more muscle you have, the more calories you burn. This is why eggs are one of our favorite foods to fill you up fast!

Enjoy eggs for lunch with a popular entrée from Nutrisystem: The Vegetable Frittata! Featuring 11 grams of protein and a medley of delicious veggies (bell peppers, zucchini and spinach), this convenient midday meal clocks in at just 120 calories per generous serving.

You can also cook up your own egg dish using a healthy recipe from The Leaf Weight Loss Blog! The Sweet Potato Black Bean Omelet combines egg whites with cooked sweet potatoes, black beans, avocado, cilantro and sriracha. It’s only 233 calories and is so satisfying you can have it as “breakfast for dinner.” 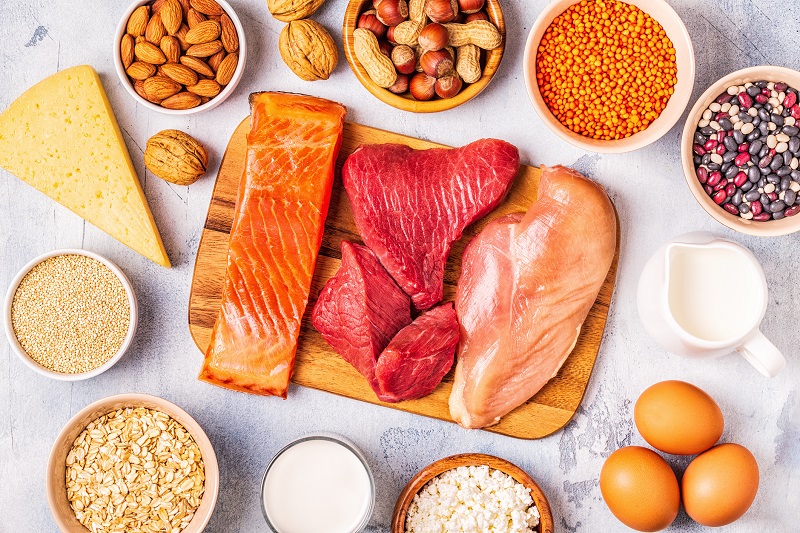 One of the big weight loss advantages of protein, both animal and vegetable-based, is that it increases the body’s secretion of satiety hormones, says Nutrition & Metabolism. These are the gut chemicals that tell you to stop eating because you’re full.

In one 2014 study, published in The American Journal of Clinical Nutrition, a group of obese men went on a two-week vegetable protein diet and then switched to two weeks of a diet high in animal protein.  They lost about the same amount of weight and experienced the same amount of satiety on both diets. “Gut hormone profile was similar between the diets, which suggests that vegetarian diets can be as effective as meat-based diets for appetite control during weight loss,” says researchers.

Start your day with 14 grams of delicious protein! They Turkey Sausage and Egg Muffin from Nutrisystem is the perfect grab-and-go breakfast for your weight loss plan.

Chicken may be one of the best choices for your other meals. It’s a complete protein with less fat and calories than other meats, says the United States Department of Agriculture (USDA). A skinless chicken breast is only 68 calories with 1.5 grams of fat in a two-ounce serving.

The Chicken and Edamame Power Bowl from Nutrisystem dishes out 17 grams of protein for just 240 calories. It features flame-broiled chicken, edamame, bell peppers and a fluffy bed of brown rice, lentils and farro. We toss it all in our traditional teriyaki-style sauce for a diet-friendly dose of flavor.

If you’re a fan of the lettuce wraps at a popular nationwide Asian restaurant, you can make your own with lean ground chicken, onions, garlic, bell peppers, water chestnuts, carrots and ginger. It’s spiced just right and tucked into a crispy-soft bibb lettuce for a smart and satisfying food that will fill you up.  Get the recipe here! > 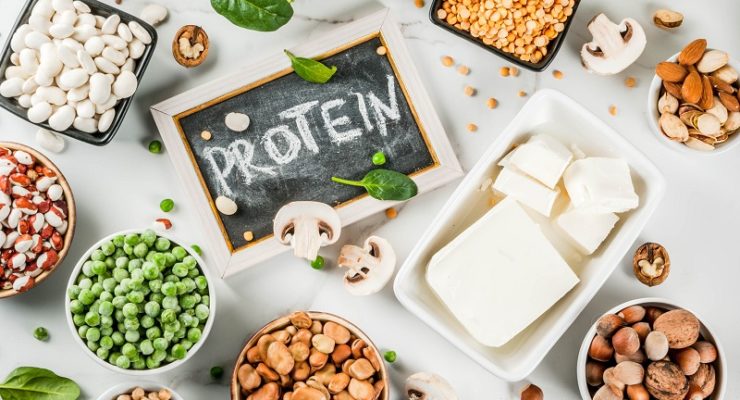 10 Meatless Ways to Get in Enough Protein for Vegetarians 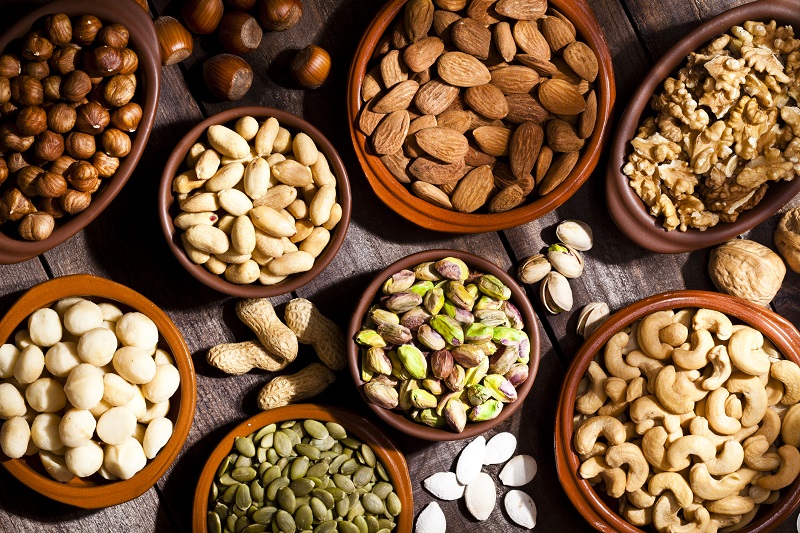 Yes, nuts are calorie-dense foods. One ounce (about a handful) of almonds, for instance is about 160 calories. However, a 2018 study by scientists at the USDA Agricultural Research Service found that the human body doesn’t actually use all those calories. For example, one ounce of pistachios will run you almost 162 calories—except that only about 154 of those calories are actually available to your body. The researchers found out that almonds actually have 32 percent fewer calories than you’ll find on the food label and walnuts had 39 calories less than the 146 calories on the label, making them great foods to fill you up.

You still can’t eat loads, but you probably won’t want to: Nuts are so filling they may help you avoid over-indulgence. According to research, published in Current Opinion in Clinical Nutrition and Metabolic Care, “Although energy dense, nuts have some satiety-inducing effect.”

You can start your day off with a delicious nutty treat, our Banana Nut Overnight Oatmeal made from almond milk, maple syrup, sliced banana and stick-to-your-ribs oatmeal.

If you want to snack on more than a handful of nuts, try this savory Tahini Yogurt Parfait that layers Greek yogurt mixed with tahini (sesame butter), lemon sea salt and pepper with a baked granola made from oats, sesame seeds, pine nuts and garlic powder. It’s only 215 calories and combines two other foods that fill you up (nuts and Greek yogurt) for staying power. 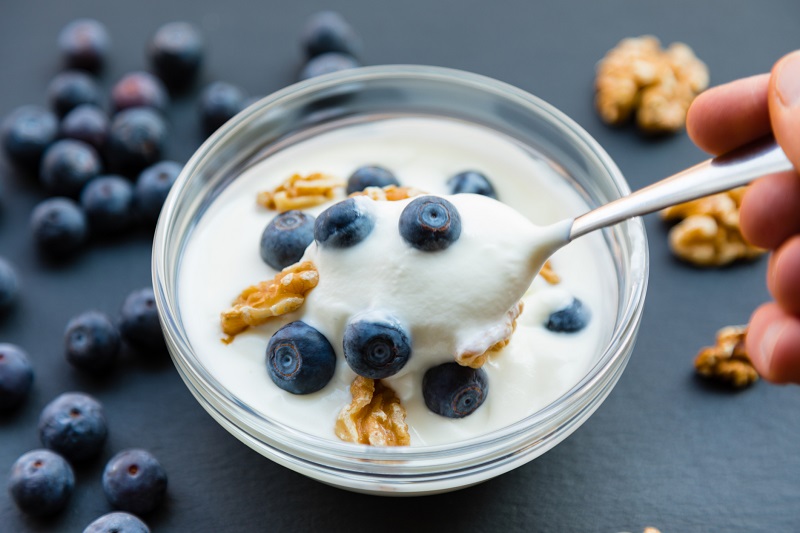 Snacking itself can help reduce between-meal hunger. But picking the right snack can make all the difference. Try adding high-protein Greek yogurt to your weight loss menu!

In one 2013 study, published in the journal Appetite, women who snacked on low, moderate or high-protein yogurt in the afternoon all experienced a decrease in hunger. However, those who had the high-protein yogurt (Greek-style, with 24 grams of protein) stayed fuller longer and were even able to delay eating their next meal longer than those who ate the lower protein yogurts. And calories played no role in curbing their appetite—all the yogurts clocked in at 160 calories.

Combine Greek yogurt with other foods that can fill you up! Try our recipe for Chunky Monkey Yogurt Parfait. It’s only 205 calories and easy to whip up in minutes. You start with a half-cup of nonfat plain Greek yogurt mixed with powdered peanut butter and honey. Layer it with banana slices and chopped peanuts and top with cacao nibs. 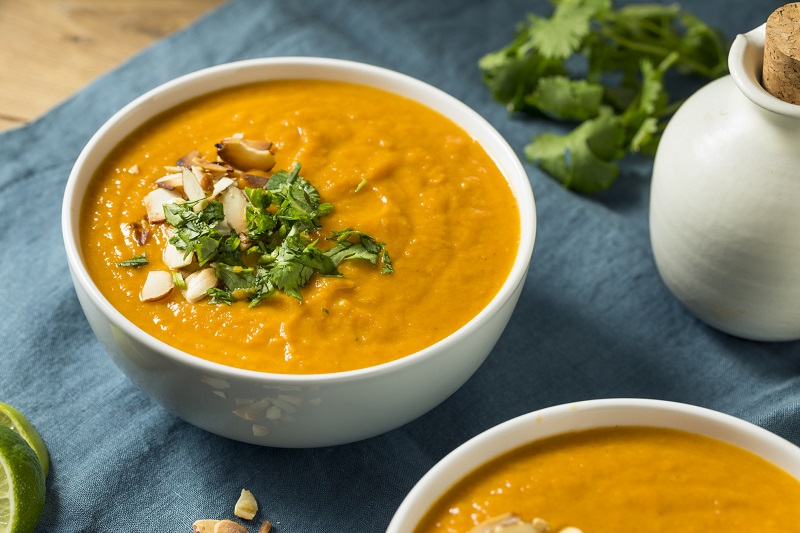 Studies have found that fluids, even high caloric ones, are generally a fail when it comes to satiety. They just don’t fill us up the same way that a hearty meal does.

Soup is that one exception. Several studies have found that having soup as meal or before a meal can reduce hunger and curb your appetite to help you eat less at the following meal. In one study, published in the journal Physiology & Behavior, study volunteers were less hungry and ate less on the days that they consumed a 300-calorie soup compared to when they got their 300 calories from a beverage.

Your Nutrisystem soup choices are plentiful and most of them combine other filling foods to bring your post-meal appetite under control. Try our Chicken Noodle Soup, a classic comfort food that clocks in at just 110 calories but provides 10 grams of protein. Looking for a vegetarian meal? Our Classic Pasta Fagioli is filled with tender pasta, beans and veggies for a hearty dinner that’s smart and satisfying. 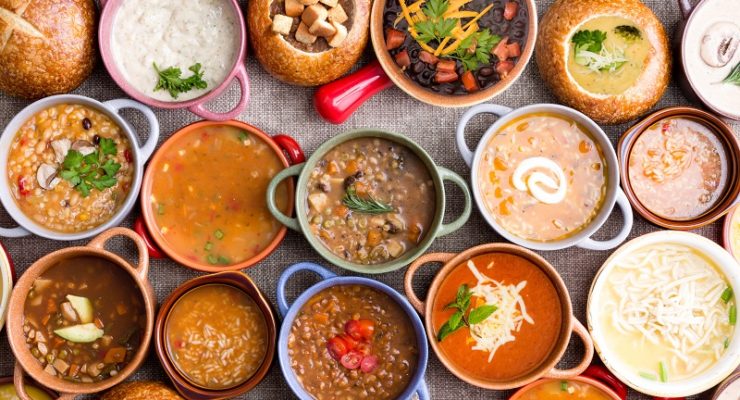 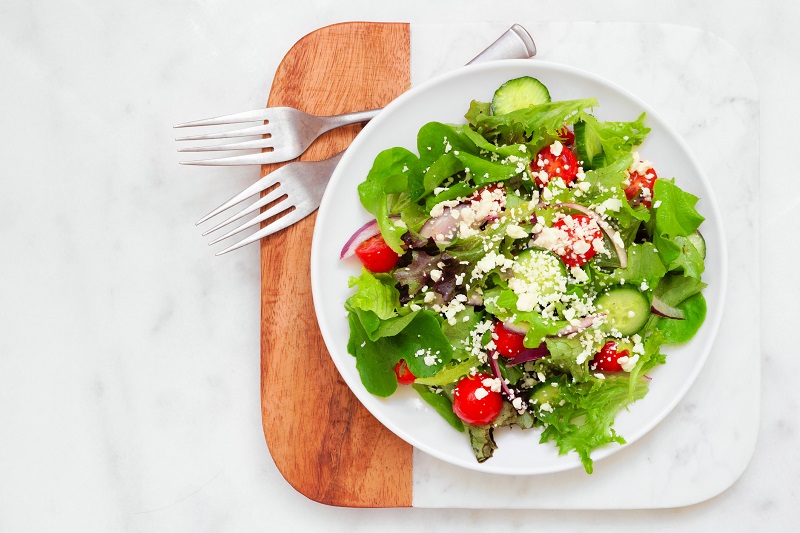 Traditionally the mainstay of any diet plan—whether you’re on it to lose weight or improve your health—is salad. The reason, now identified by scientific research, is that salads tend to be high in volume (translation: loads of food) while low in calories. In fact, research published in the Journal of the American Dietetic Association, found that foods that had a high water content tended to be more filling (which may partly explain the satiety success of soup, too). In the study, volunteers who ate a low-calorie salad before a pasta meal ate as much as 12% less of the pasta.

One of the takeaways from this research is that adding water-rich foods like veggies and fruits to your meals can help you cut down on how many calories you take in while—bonus—increasing the amount you’re able to eat while still staying on track. In other words, “watery” foods fulfill every dieter’s desire to eat more, not less, to lose weight, says ScienceDaily.

Whip up a dish that’s filled with foods to fill you up! Try creating a healthy Flex meal salad on your Nutrisystem plan. Combine a variety of non-starchy Vegetables with PowerFuels, SmartCarbs, Extras and Free Foods to create a balanced and satisfying dish. Find out how to build “the best salad ever” right here! > Then try out our recipes Green Goddess Salad and Roasted Turnip Salad for a hearty salad that eats like a meal. 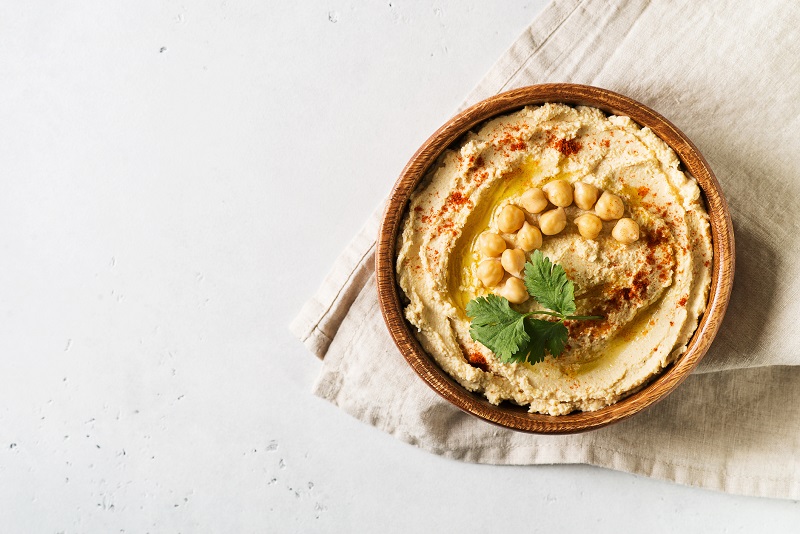 An August 2020 study, published in the Journal of Nutrition, found that an afternoon snack of hummus, a spread made from cooked mashed chickpeas, tahini (sesame butter), lemon and garlic, helped study volunteers feel so full that they were able to say no to dessert later on. They were also likely to eat less in general. Hummus snackers even had better blood sugar profiles. Keeping your blood sugar from spiking and diving is another way to curb your appetite.

Of course, you can easily find pre-made hummus at your local grocery store. However, making it from scratch is quick, easy and fun. It also helps you avoid any unnecessary additives! Homemade hummus is one of our favorite healthy foods that fill you up. Try out our healthy recipes below!: 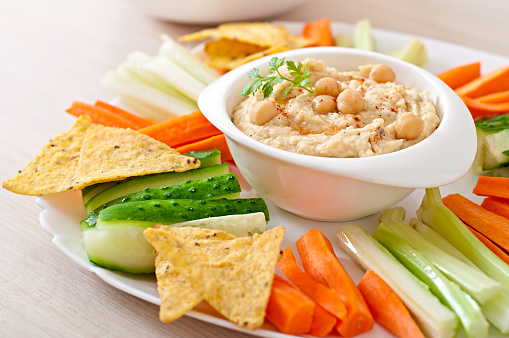 How to Make Your Own Hummus

Kristen Bell: Advocate for the Homeless

Superfood Saturday: All About Avocados

What I’m Packing for the Hospital for Baby #2